Here’s what I imagine the maker of this UFO was thinking:

“This Around the World pattern is so cute — I’m going to try it.” 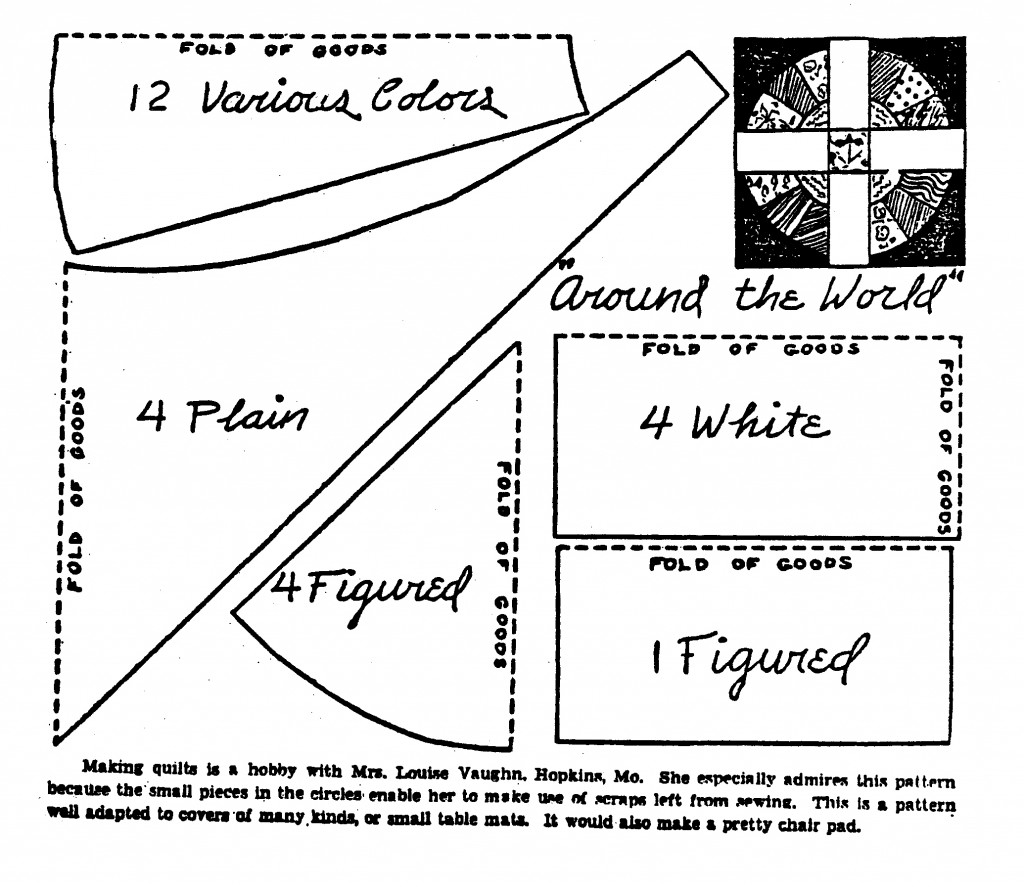 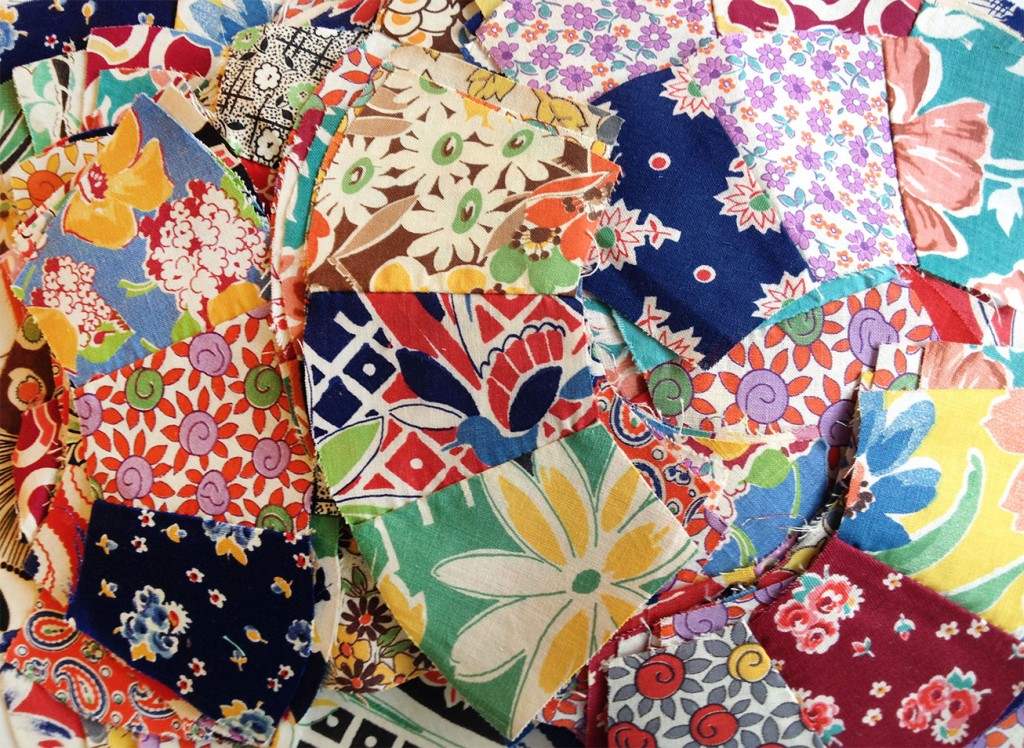 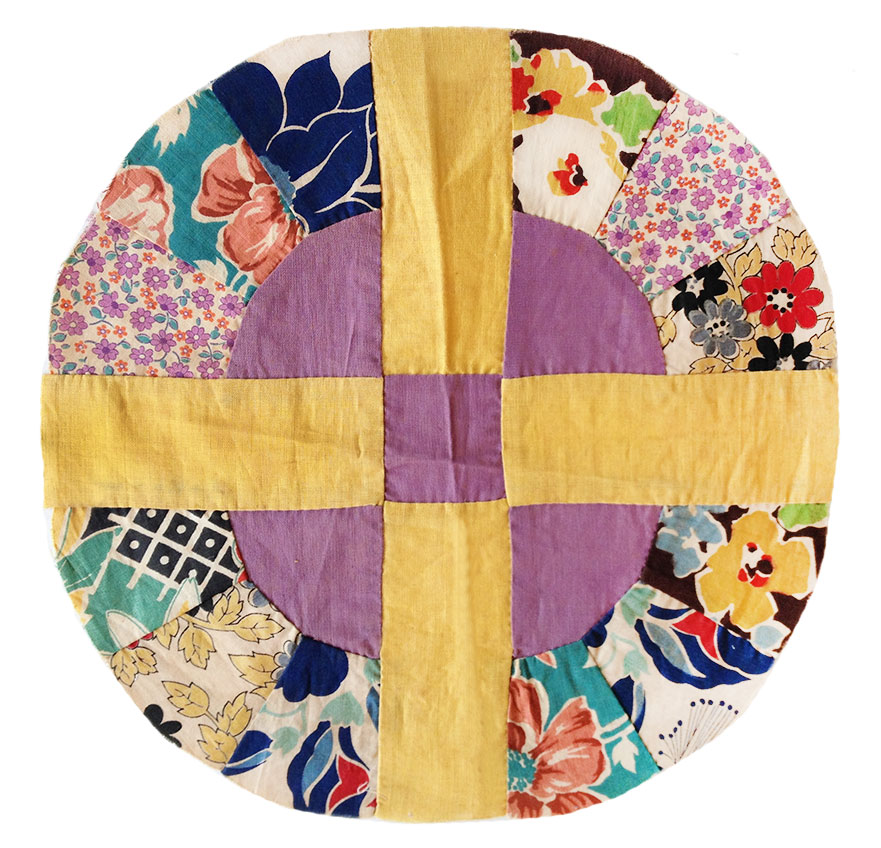 “Oh, I like this green better, but now I have to add those tricky corner pieces.” 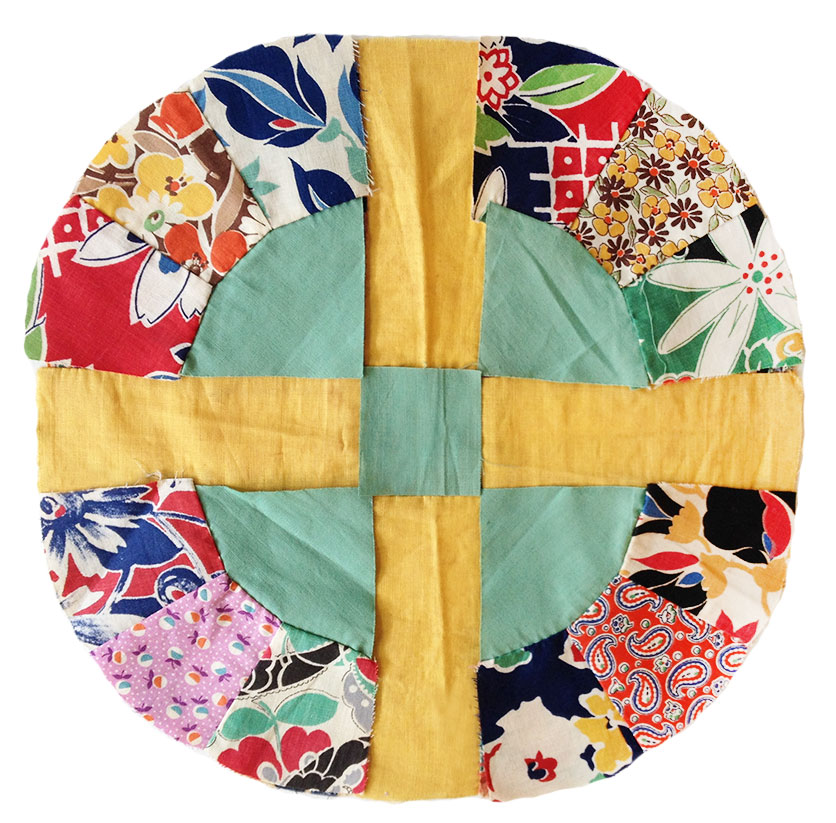 “Okay, this is hard, and the muslin background spaces are going to have a bunch of seams which will make quilting more difficult. There must be an easier way.” 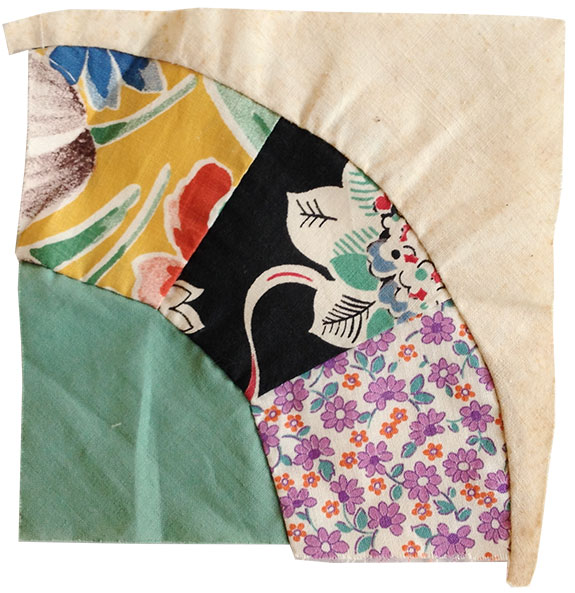 “Will this work? I could make the blocks this way, and add the yellow as sashing with green cornerstones.” 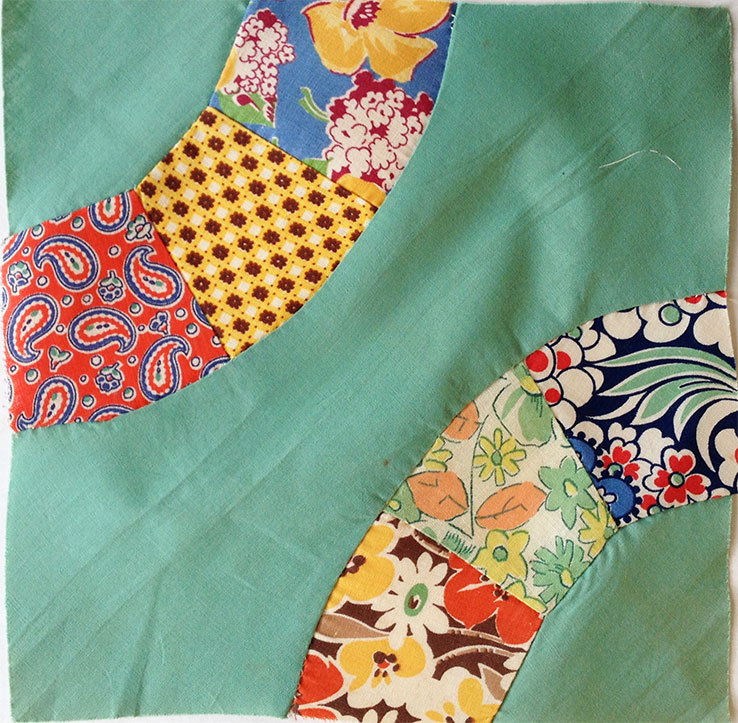 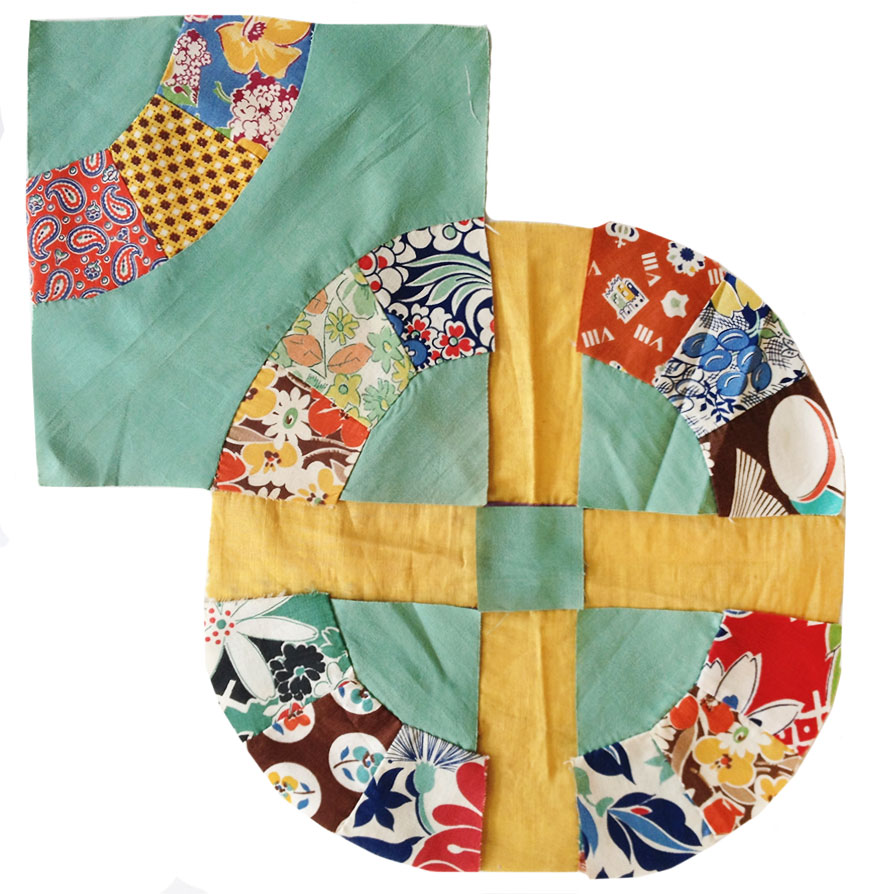 “What if I just forget about the original pattern, and sew four of the units together in a circle?” 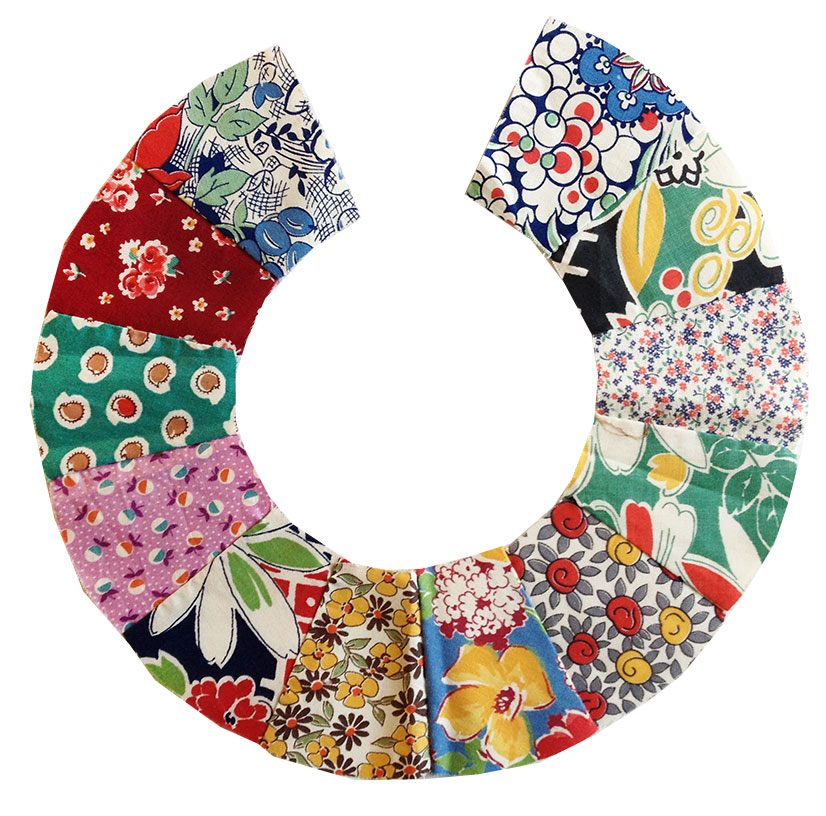 I’ve had plenty of conversations like this, and it wouldn’t surprise me if this was similar to what happened. Instructions were minimal on these old newspaper patterns, and the KC Star patterns had no directions at all. I think if the quilter had drawn a picture of several blocks, she might have discovered an easier way to piece this pattern, because she seemed very close to figuring it out. Of course she could have just appliquéd the block to the background, but that didn’t seem to occur to her. I’m going to piece the quilt as shown below (blocks outlined in red, background one piece without seams). The pattern would probably be called a completely different name when it’s sewn together like this, but what the heck — it looks the same, and eliminates a bunch of seams. Sometimes you just have to think outside the block. 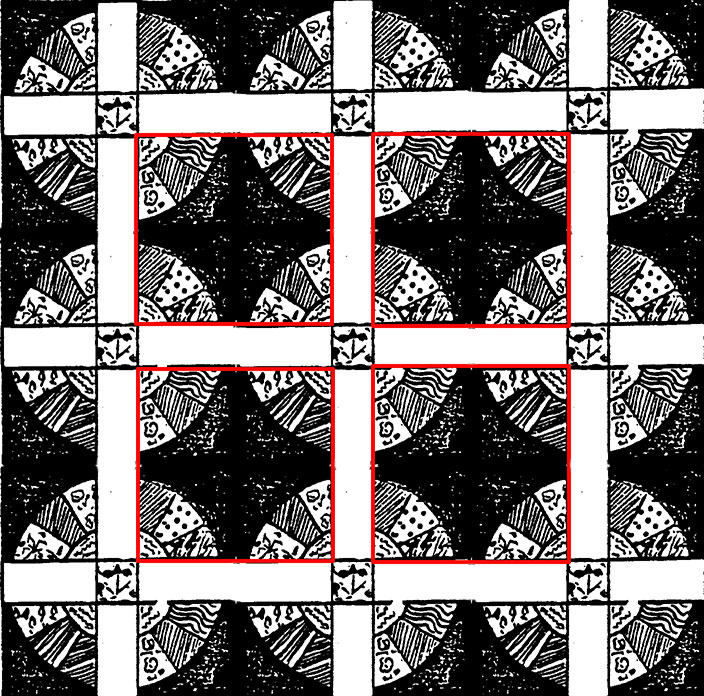 This large group of quilt pieces and partial blocks was purchased on Etsy. Although some larger green pieces were included in the group, there’s not enough to complete the quilt, so I’ll be replacing it with a vintage fabric from my stash. Also, every block and arc needs to be taken apart, re-cut and re-sewn, because the pieces were not cut precisely.  My background fabric will be off-white, as the quilter imagined in the fourth photo (I notice that she cut that corner piece with bias edges).

It’s ironic that I depend upon the UFOs of old quilters for my quilt fabric — sometimes I can see that the quilt wasn’t finished because of frustration in attempting a challenging pattern, but many times it’s unclear why the project wasn’t completed. Maybe the quilter died, which is something I think about a lot, being 67 and wondering if I am ever going to be able to finish all the quilts I have in progress. I need to focus and get busy quilting! 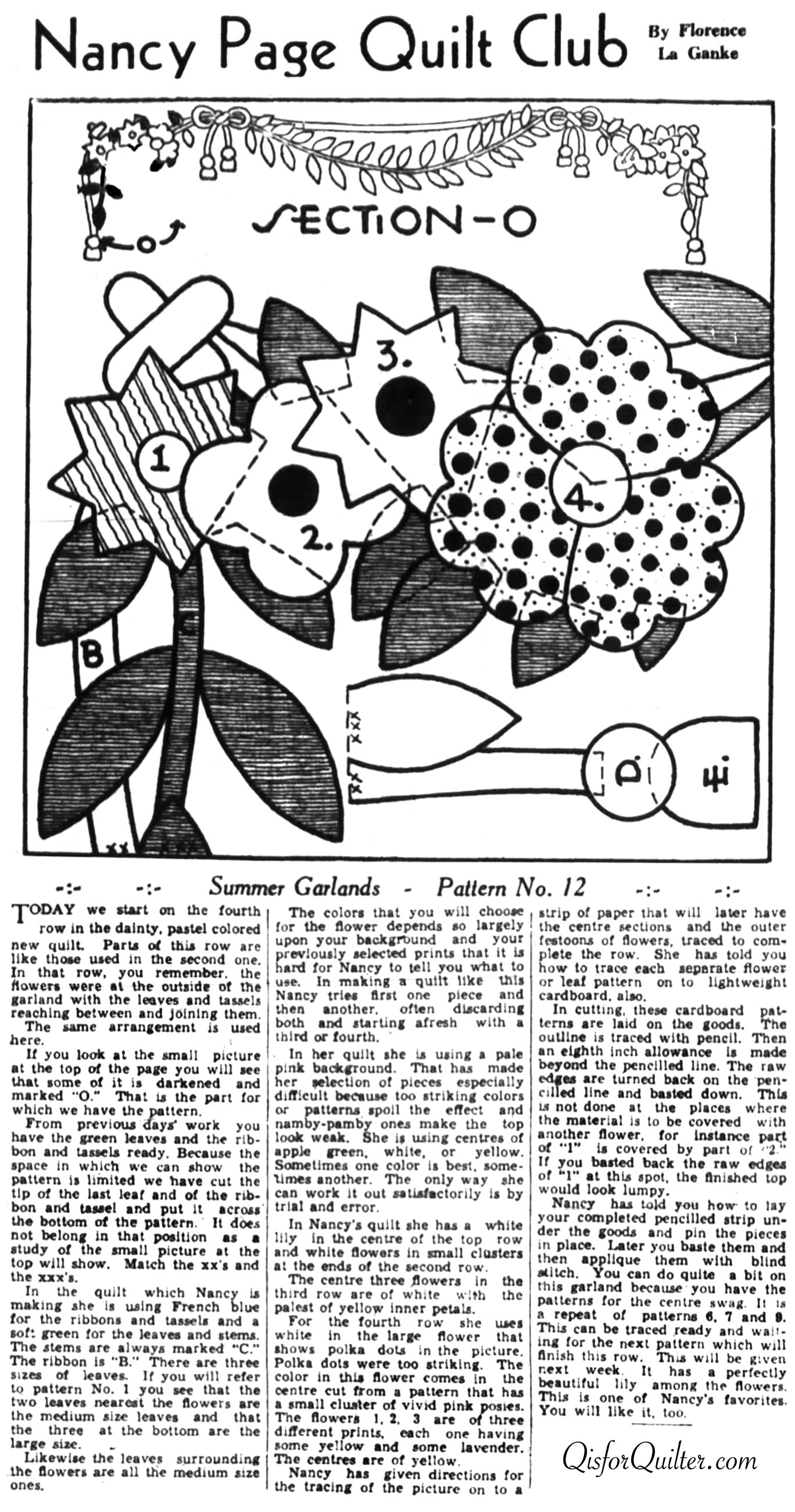 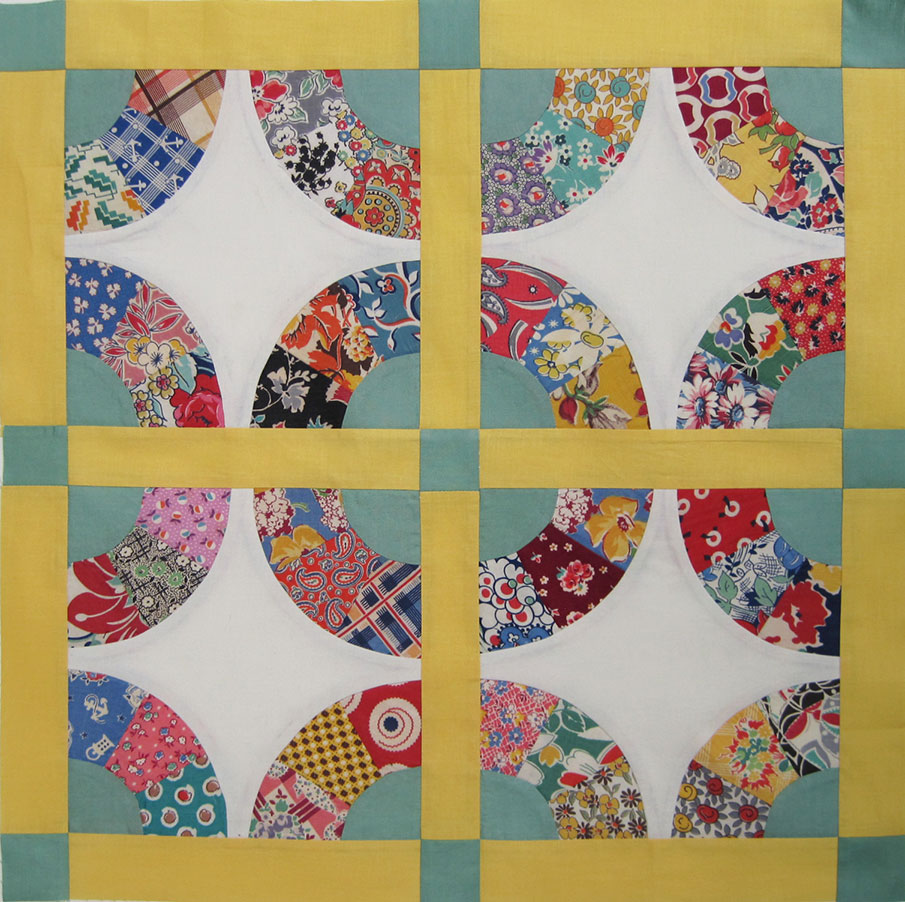 Around the World Quilt — Beginning