Last Wednesday was a very good day.  I stopped by Goodwill because Wednesday is senior discount day, plus it turned out that all of the linens and fabrics were 30% off.  In addition to ten big bed sheets for another rag rug, I found 3 bolts of fabric (two pretty Waverly fabrics and one white handkerchief linen).  Then I noticed an end cap stacked with loads of decorator fabric sample books, all marked $1.99.  I looked through every book, and ended up buying 12 of them — mostly linen and cotton, with a couple of silks.  One of my favorites was a Pierre Deux book with beautiful prints.  The only problem was, while all my other sample book fabrics had only a strip of paper glued to the back, these samples were almost completely covered with paper.  Once they soaked in warm water overnight, I was able to scrape off the paper; although remnants of the glue remained, that didn’t bother me for the project I had in mind.

The pillows I made are similar to the one I made for my daughter using West Elm swatches.  After cutting the sample pieces into 4″ squares, I used spray glue to attach the squares to a piece of muslin, being careful to place them as close together as possible.  Next, using thin strips of fusible web, I applied 3/8″ ribbon on top of the seams (to hold the ribbon in place), and then top stitched the ribbons very close to the edges.  For the back of the red pillow, I happened to have a wonderful sample fabric by Cowtan & Tout; but I had to buy a new piece for the back of the blue pillow. 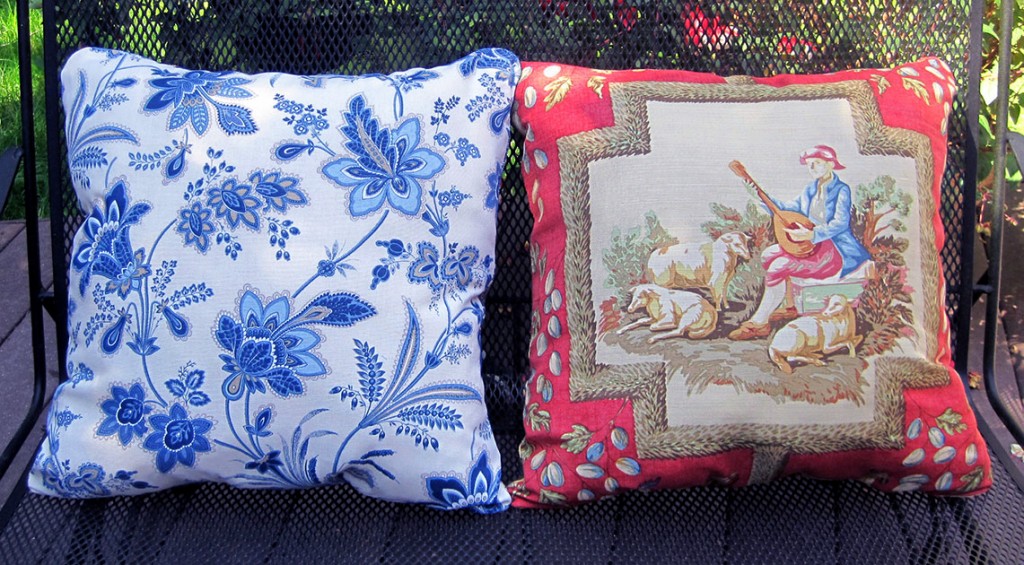 As for the rag rug, I think I like a scrappier look best, but I do like the colors in this one, and sheets are very nice to work with.  Cotton and cotton-blend sheets are all pretty much the same weight with a tight weave that makes them easy to crochet, and you can cut nice long strips.  Right now I’m working on a rug for my sister using flannel strips, and the thickness and fuzziness of the fabric makes it horrible to work with. 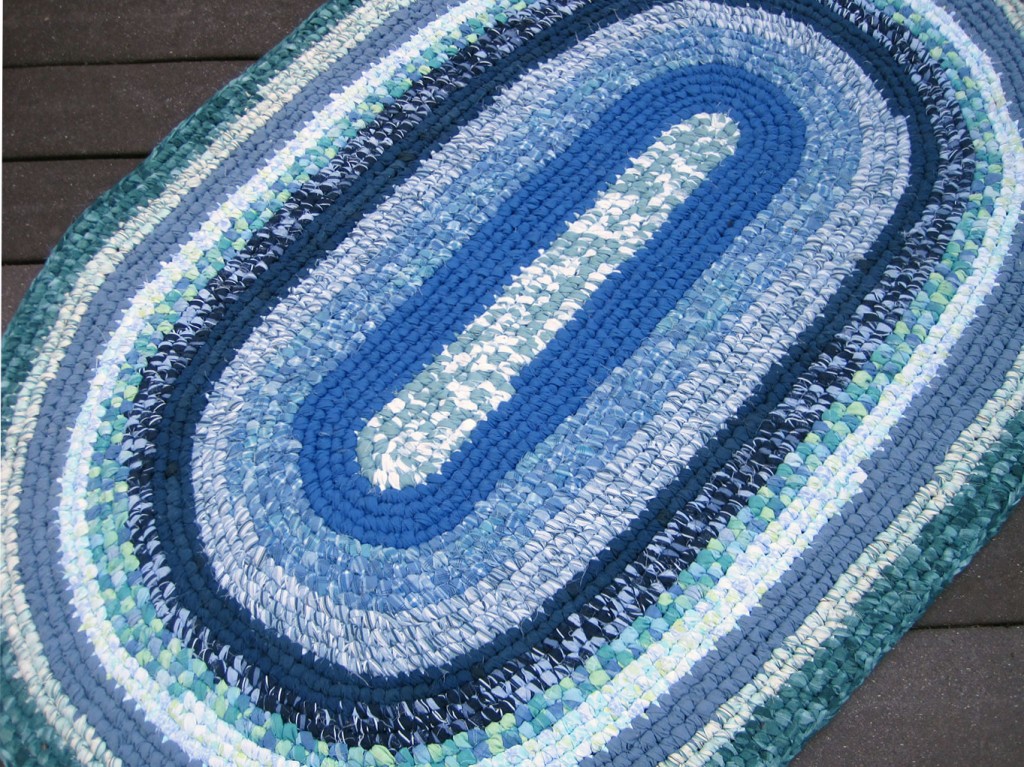 Normally I don’t buy large cuts, and I’m not sure what I’m going to do with these three bolts of fabric.  They were just so cheap, and I’m sure something will come to me.

The Golden Almanac
Pictures by Masha
Simon and Schuster, Inc., 1944 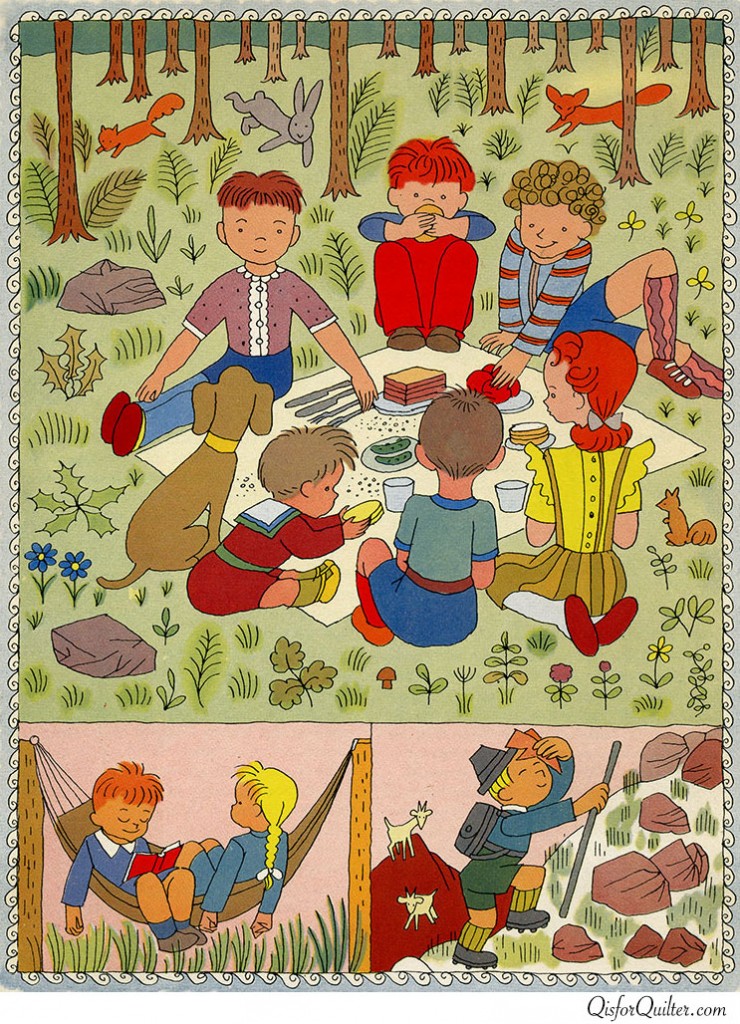 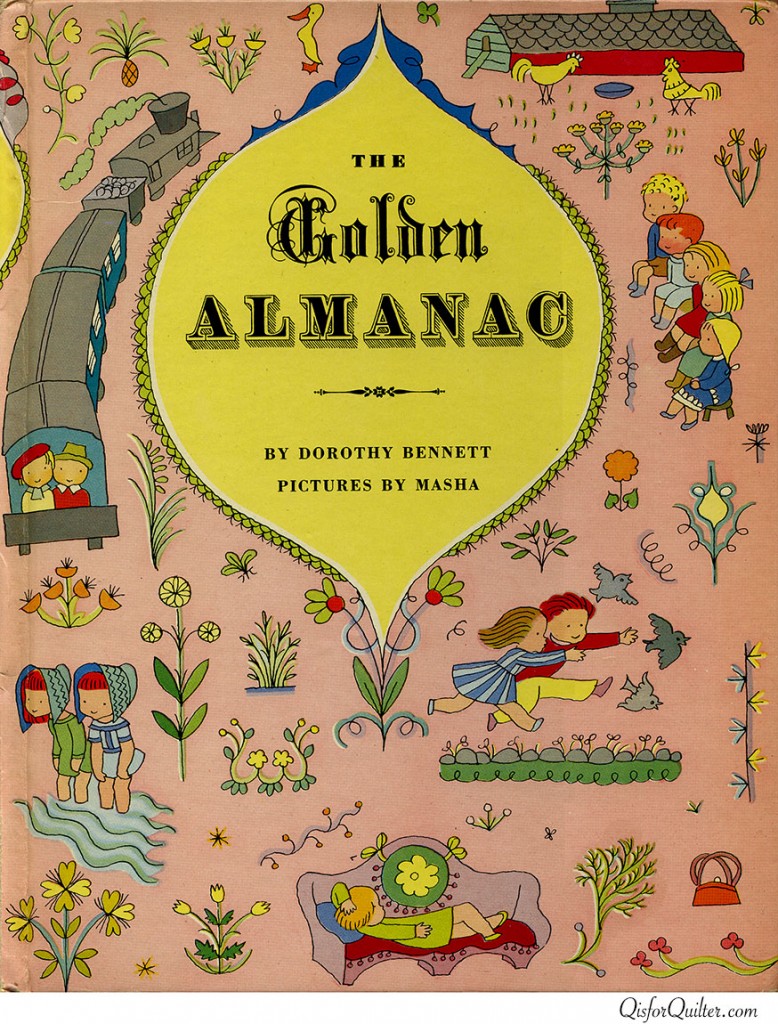 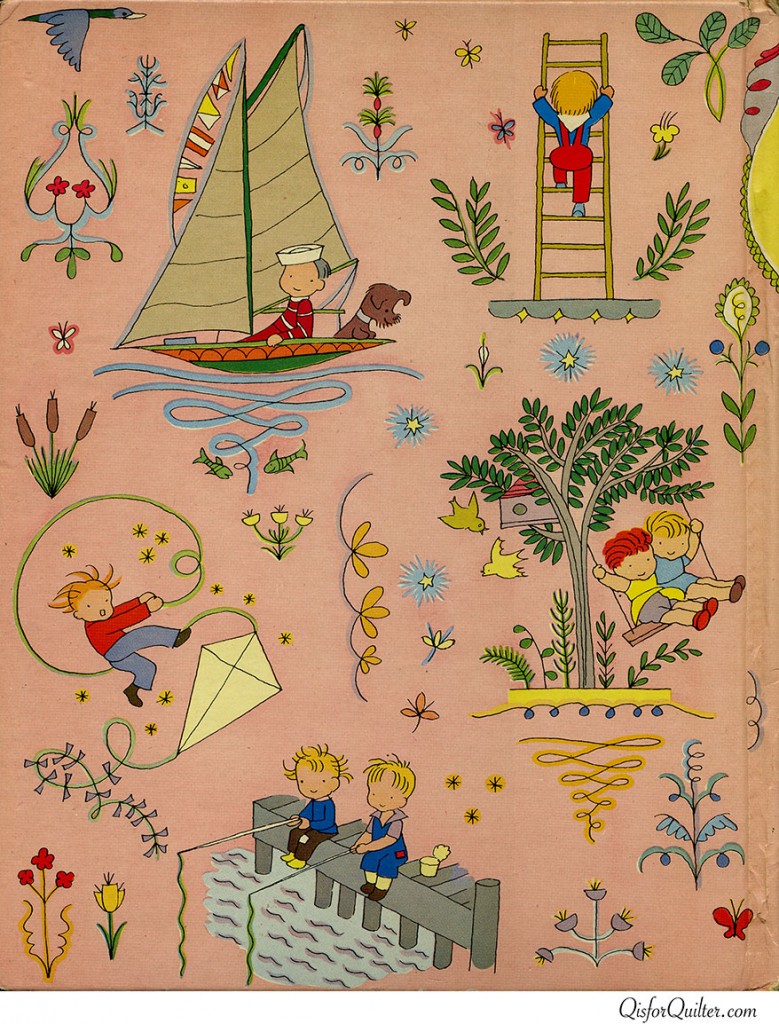 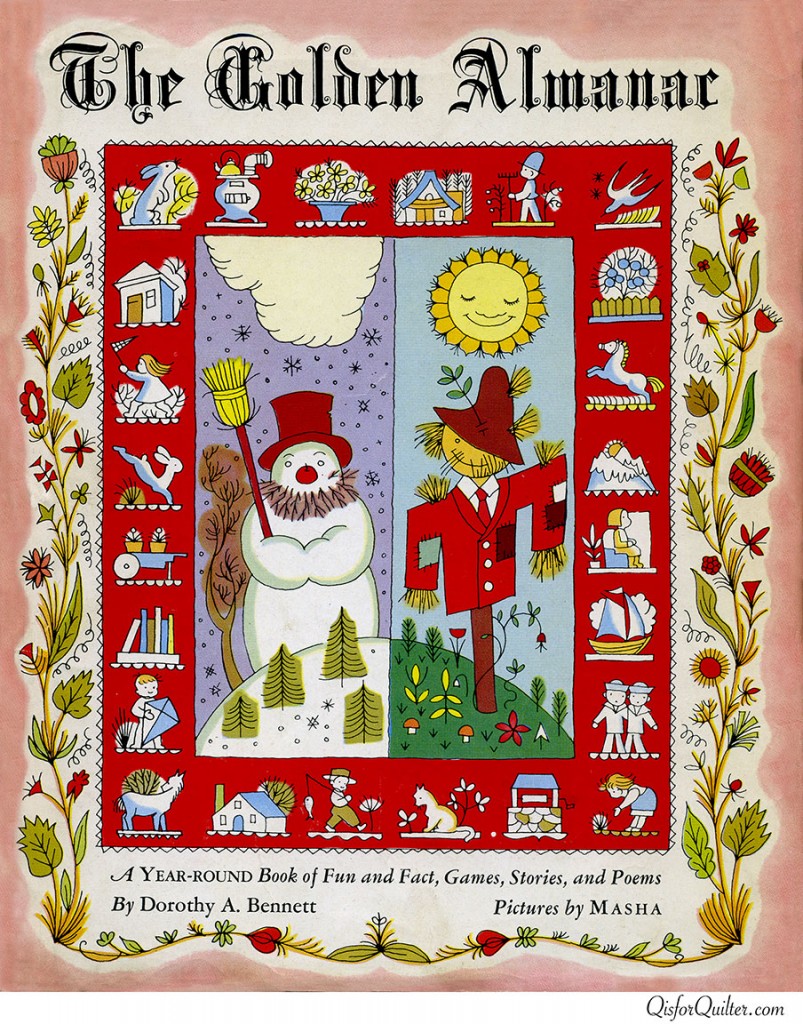 When I was growing up in Oklahoma, we lived in an old neighborhood that had a nice mix of families with young children and older couples.  Only a couple of homes on our block had air conditioners, so the women usually spent part of their summer afternoons sitting and visiting each other on their porches.  Many of them did some type of needlework while they talked.

Mrs. McCormick, who lived next door, was my favorite.  She would bring out her basket filled with colorful fabric strips wound into balls, and proceed to knot those strips into rugs using a comical giant needle her husband fashioned out of an old toothbrush.  Once she tried to teach me how to make the knots and gave me some strips to work on, but I was little and it was hard, so mostly we just chatted while I watched her work.

I thought of Mrs. McCormick and those rugs years later when my son was a little boy, and I wanted to make a big rug for his room.  The library didn’t have any information about toothbrush rugs, so I decided to try crochet instead, which produces a rug with a similar look.  I was really happy with it, and for awhile I went on a binge of rag rug-making.

A few days ago, I decided to make a new rug for the kitchen.  This time I easily found instructions online for the toothbrush technique, so I made a needle just like Mrs. McCormick’s, and was excited to start knotting.  The thing is, after tying several rows, I just didn’t like the process as well as my old crocheted rugs, and it looked sort of messy in comparison.  I really wanted to use my big toothbrush needle, but after a few unsatisfactory attempts, I finally gave up and went back to my familiar crocheted rug.

With a rotary cutter, I cut my strips 1 1/2″ to 2″ wide, depending on the thickness of the fabric, and sewed the ends together on my machine.  I didn’t use a pattern, but just occasionally added extra stitches to maintain the rug shape and make sure it stayed nice and flat.  The rugs have a wonderful old-fashioned look; they are thick (about 1/2″), heavy, and require lots of fabric (the two outside green rows are an entire twin flat sheet).  Anyway, it’s a great way to use up any old bed sheets or ugly yardage you might have lying around, since the prints are almost indistinguishable in the rug. 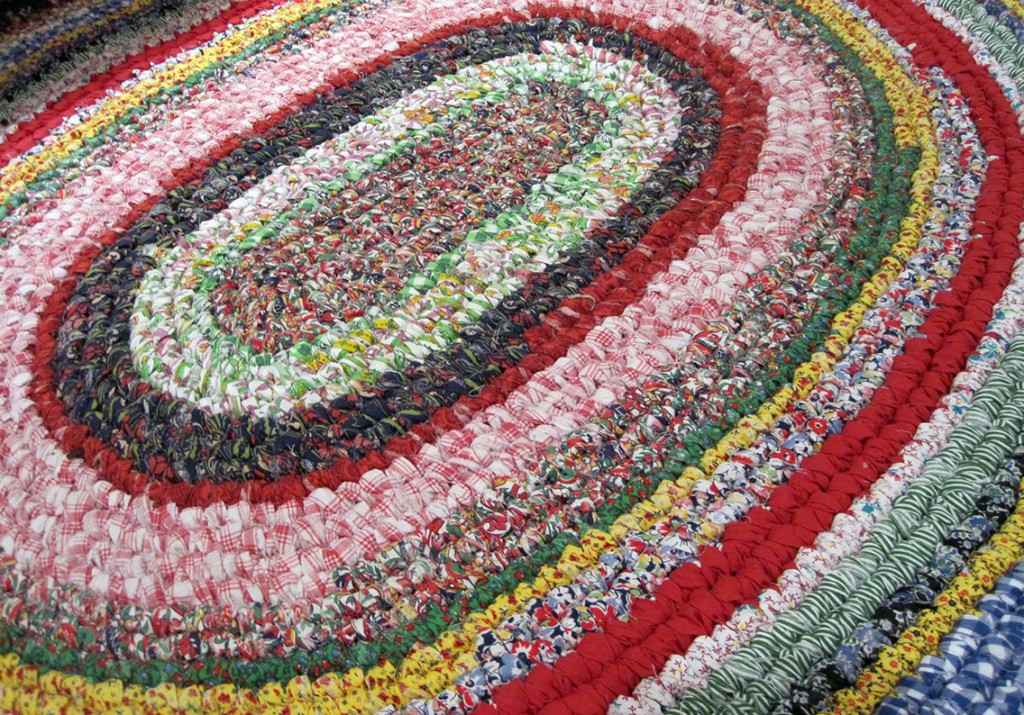 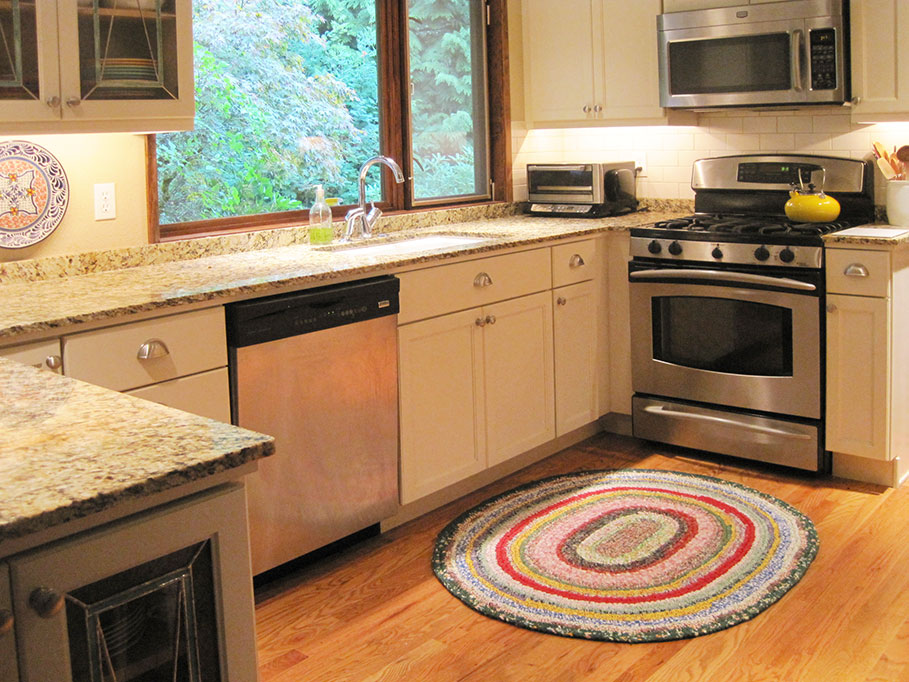