A few years ago I saw a listing on ebay for some very unusual appliqued squares.  Although the squares were listed as quilt blocks, I suspect they were originally a hand stitched child’s book.  The edges were finished, and they had obviously been well-loved.  The motifs were blanket stitched, but because the edges had not been turned under, the fabric had begun to ravel, especially in the letters.  In spite of the condition issue, the lot sold for what I remember to be an astonishing amount of money, probably because the designs are so darn cute. 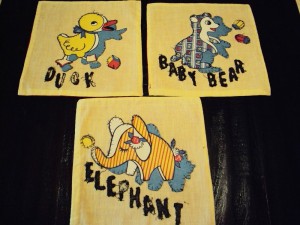 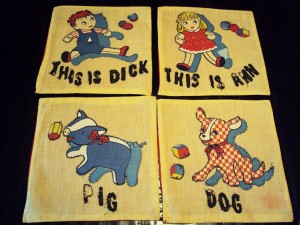 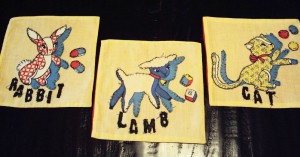 From the listing pictures I could tell that these blocks were not constructed using separate pieces, but rather from one printed novelty fabric.  I saved the listing photos anyway, because I wanted to draw new patterns and try these in some combination of applique, crayon and embroidery.  I loved the idea of the shadow.

I drew all the patterns, and put them in my huge “To-Do” file where they have been languishing ever since.  Then a couple of weeks ago, I saw this photo included in an ebay listing for almost 5 yards of vintage 36″ wide fabric, and I freaked. 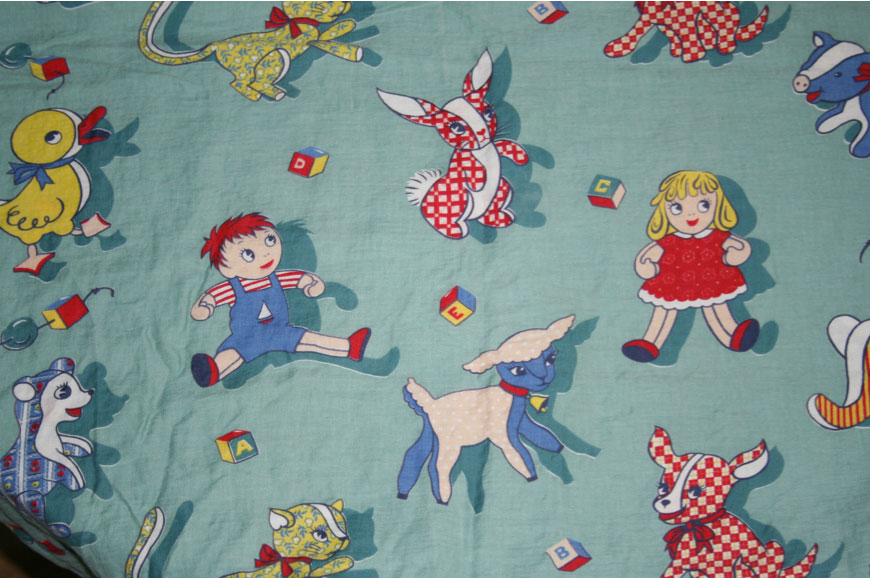 There are 11 repeats of the 10 toys, which is more than enough for me to make a quilt and also a little book similar to the one on ebay.  I think it was so clever of the original maker to turn this fabric into a book.  The fabric itself is some kind of cotton blend; it’s a good weight (not heavy like a drapery fabric) and is tightly woven, but the weave itself is unusual and it has an almost linen-like feel to it.

Here are my first 6 blocks which will be about 8″.  I used the amazing glue technique on the fabric edges, cut them out and blanket stitched them to the background fabric.  I think I will save the tiny alphabet blocks for the book, but I plan to use some of the wooden bead strings in the quilt.  Although I really like the background color in the fabric, I decided to use an off white because I want to set this quilt with scrappy alternate blocks in primary colors.  Oops — I forgot to stitch the little dog’s tail. 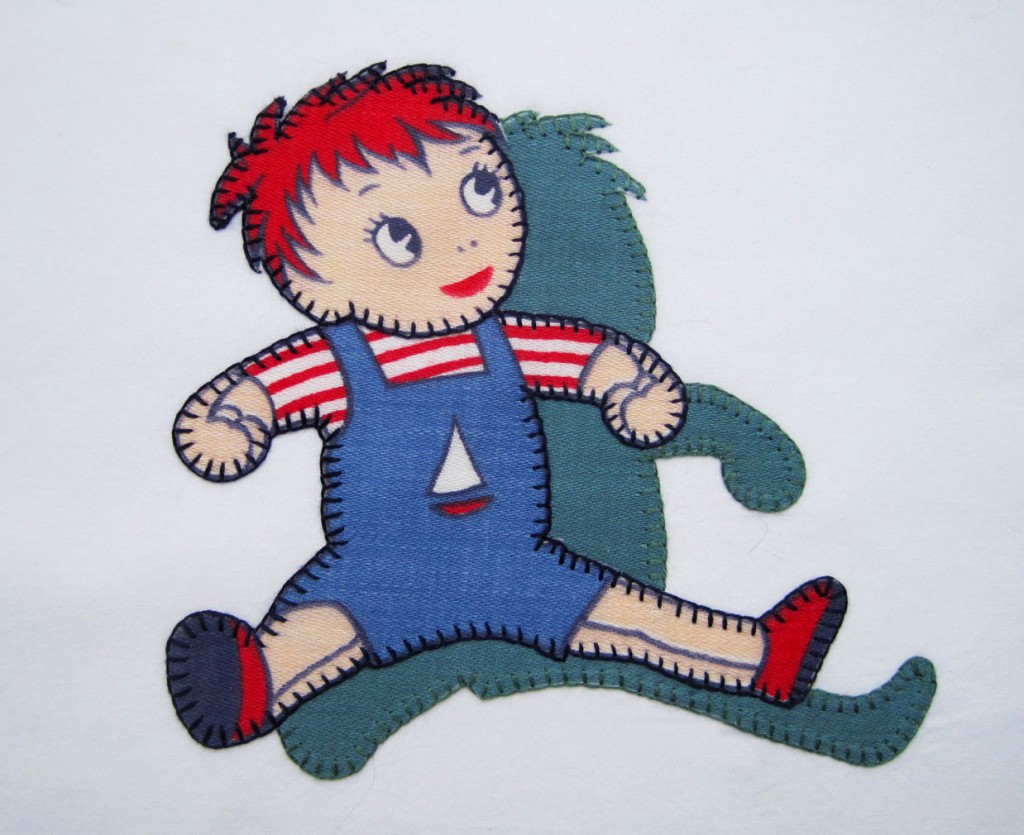 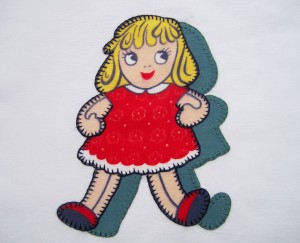 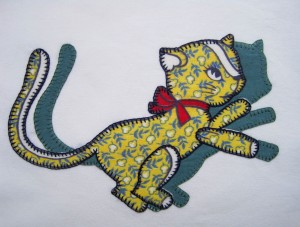 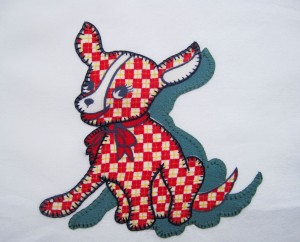 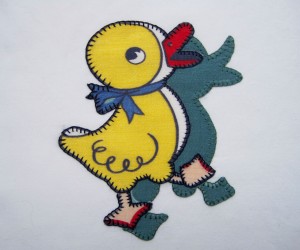 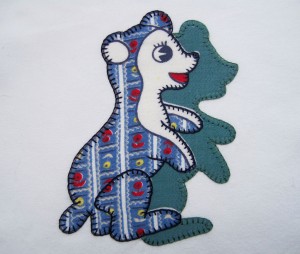 This is Phase 2 of the doll quilt kit samples — one down, and two more to go.

Years ago on ebay I saw a vintage scottie quilt with a similar diagonal set with the striped setting triangles, and I always wanted to try it.  I think it turned out pretty cute.

A couple of people asked me about the glue technique and I wanted to answer their questions.  The glue I use is Aleene’s Fabric Fusion which I thinly paint on top and just inside of the cutting line (1/8″ or less).  The glue is to prevent the fabric from raveling and to avoid having to turn under the edges of the piece; not to adhere the scottie to the background fabric.  Once the glue is dry, the piece is cut and appliqued in the usual fashion using a blanket stitch (or buttonhole if you prefer).  These stitches work best because the needle does not have to pierce the glued edge of the piece. 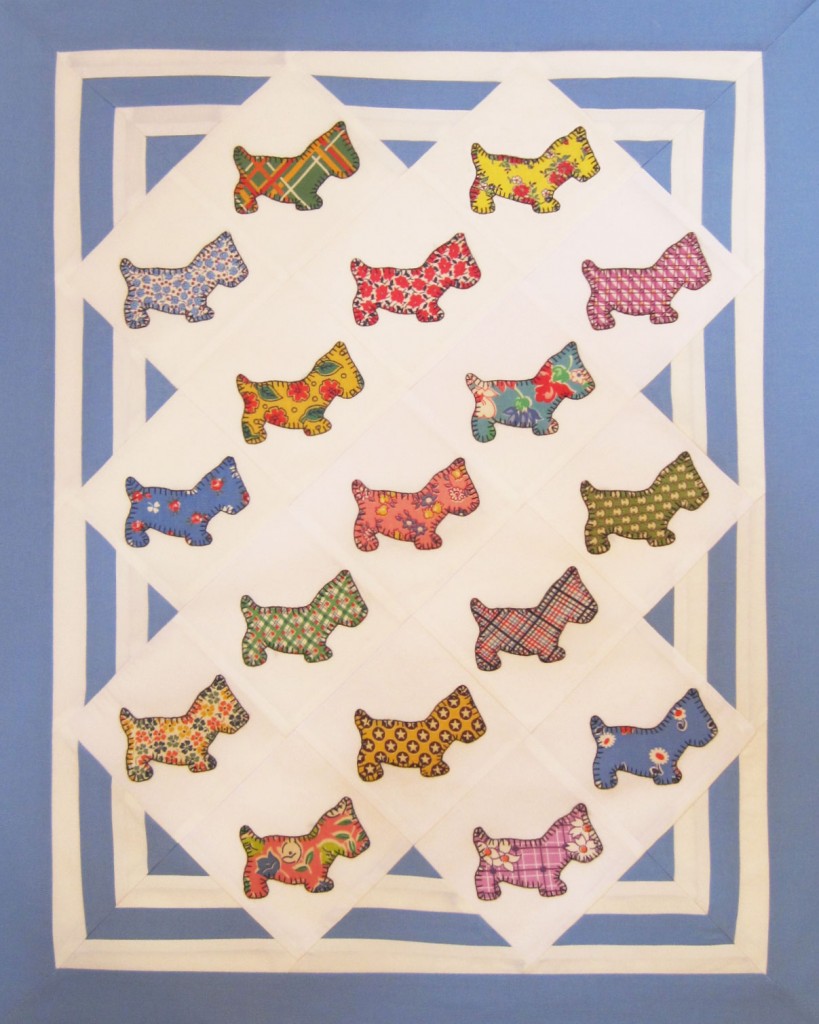 Here’s just a peek of three new doll quilts I’m working on — a feedsack dahlia, a scottie and a butterfly.

The butterfly and dahlia blocks are traditional applique using the baste-pin-stitch method (although needle turn would also work).  For the scottie quilt,  I’m using a technique I developed for the Charley Harper Water Drop Quilt.  First I trace the finished size template on the wrong side of the fabric, then I paint a tiny bit of permanent fabric glue on the penciled cutting line.  The function of the glue is merely to prevent the edges of the piece from fraying.  After the glue dries, I cut out, press, and hand stitch the piece to the fabric with embroidery floss using a blanket or buttonhole stitch (no turning under required). These stitches work well with the process because the glue is only on the very edge of the fabric and it doesn’t interfere with the hand stitching.  The glue technique maintains the intricate outline of the shape, but the piece itself remains soft and flexible.  I don’t like using fusible web in my quilts because of the stiffness factor, and it’s hard to push a needle through. 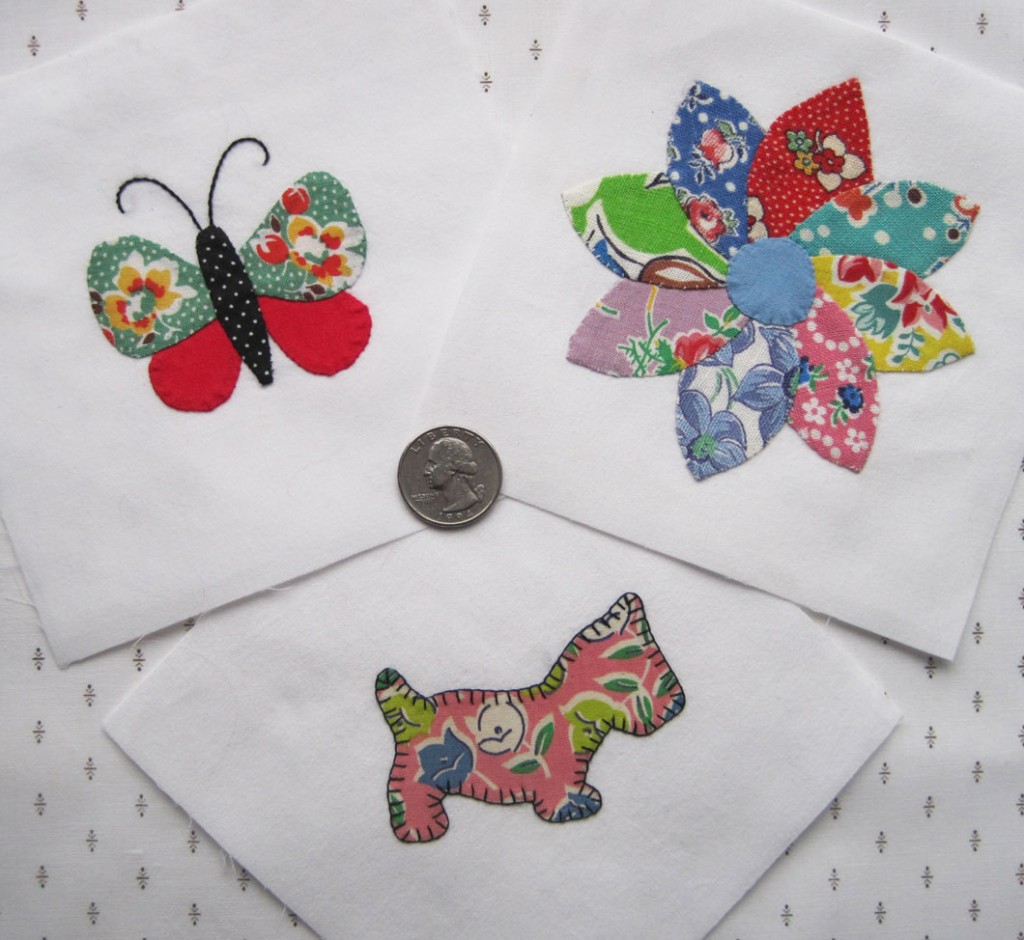 Looking through these early 20th Century newspapers is such fun.  I especially love reading the directions written by Adelaide Byrd.  These two patterns are definitely going in the queue for a future grandchild. 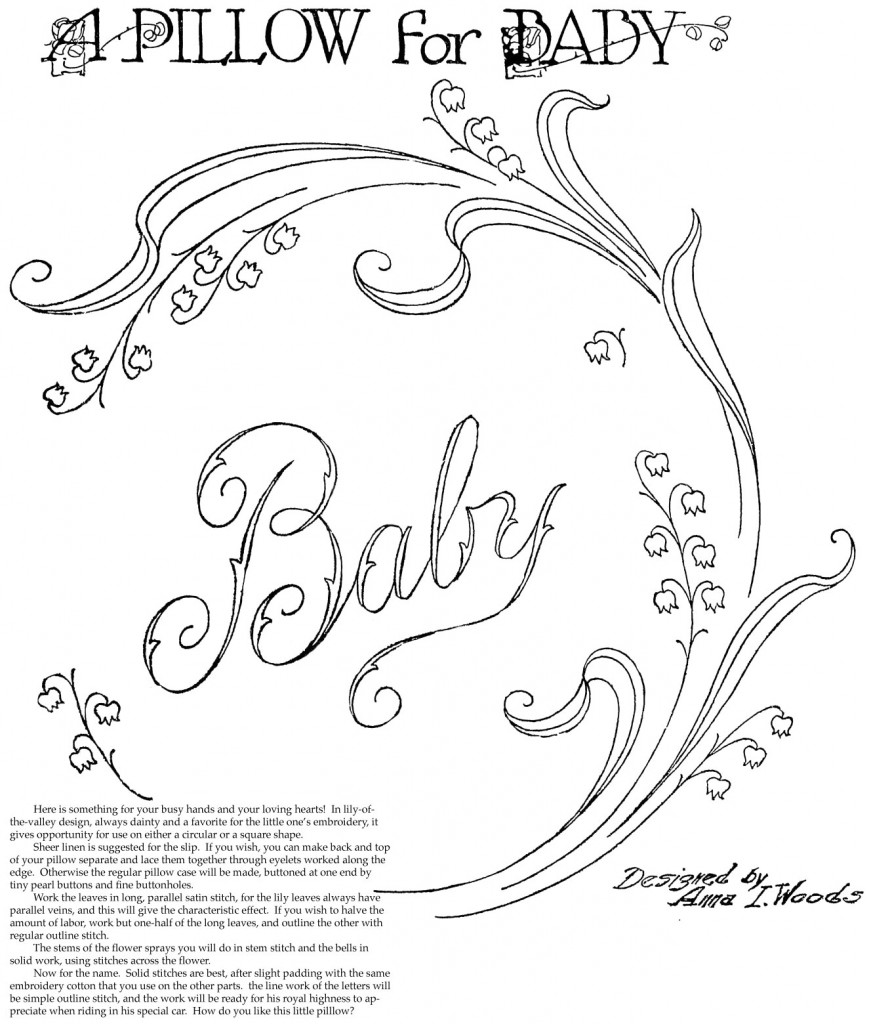 It occurred to me that the cap probably needs to be printed in its original size.  This is tricky because there are many magnification levels when I am taking screen shots of these scans, and it’s not clear what percentage they are of the original newspaper.  I have tried to calculate this by measuring the size of today’s papers and comparing it to the scans.  If my calculations are correct, the back circle piece of the baby bonnet should be 4″ across, so that was my guide.  Of course, little babies have different sized heads, so this is just a suggestion.  Update:  Laura mentions in her comment below that her newspaper has been downsized a couple of times, so the 4″ suggestion may be a little small. 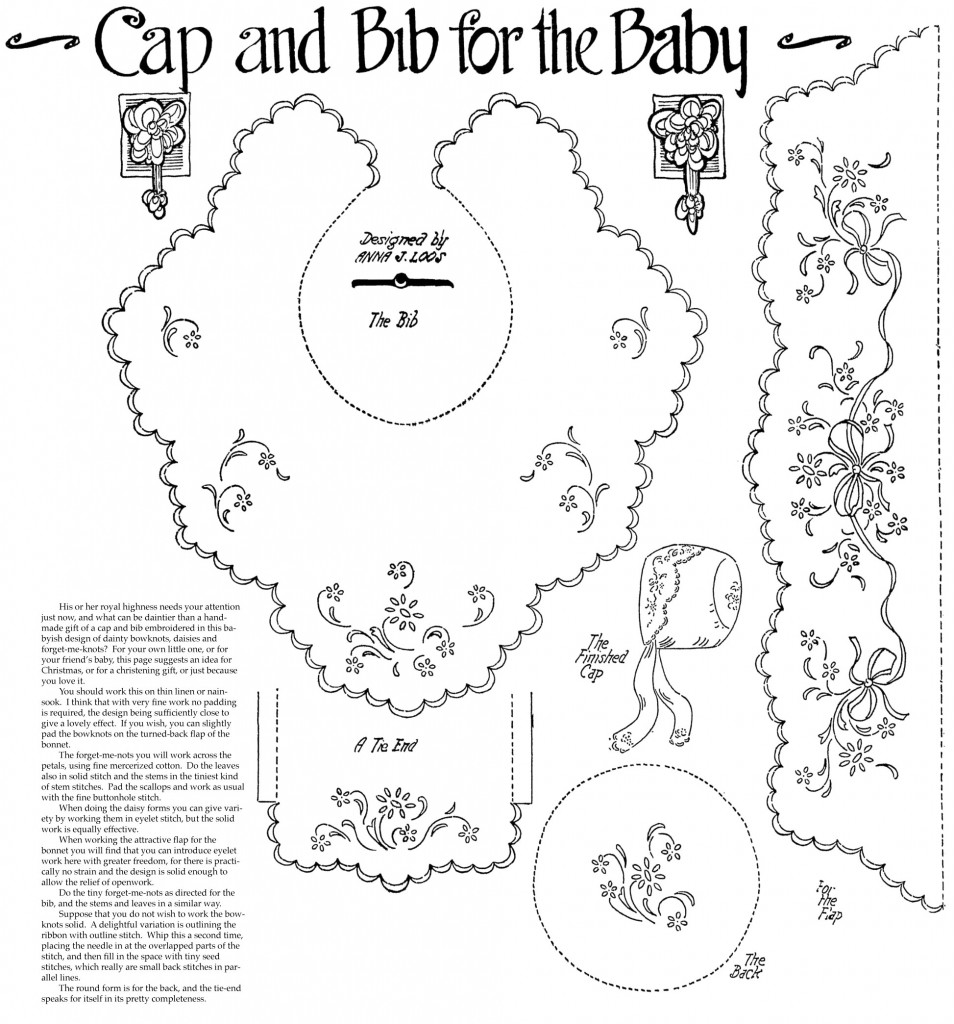 Here are two pretty embroidery patterns which appeared in the Milwaukee Sentinel in 1914.  Each week Adelaide Byrd presented a new full-sized embroidery pattern under the heading “For the Industrious Needlewoman,” accompanied by her suggestions for stitches, colors, and where the piece could be used.  Apparently, in 1914 every woman knew how to make eyelets and various other padded stitches, and their homes were filled with decorative needlework.

The scans of these old newspapers are not great, so I have cleaned up the illustrations, and retyped the instructions to make them easier to read.  Click on the images to enlarge. 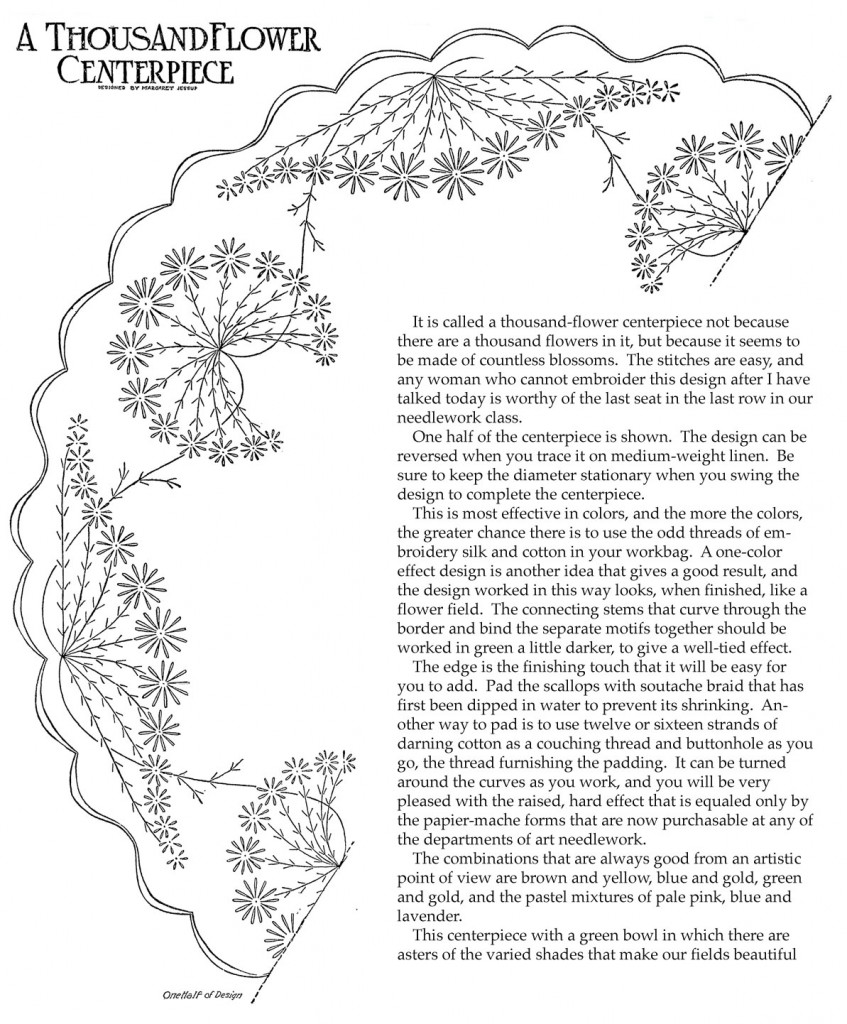 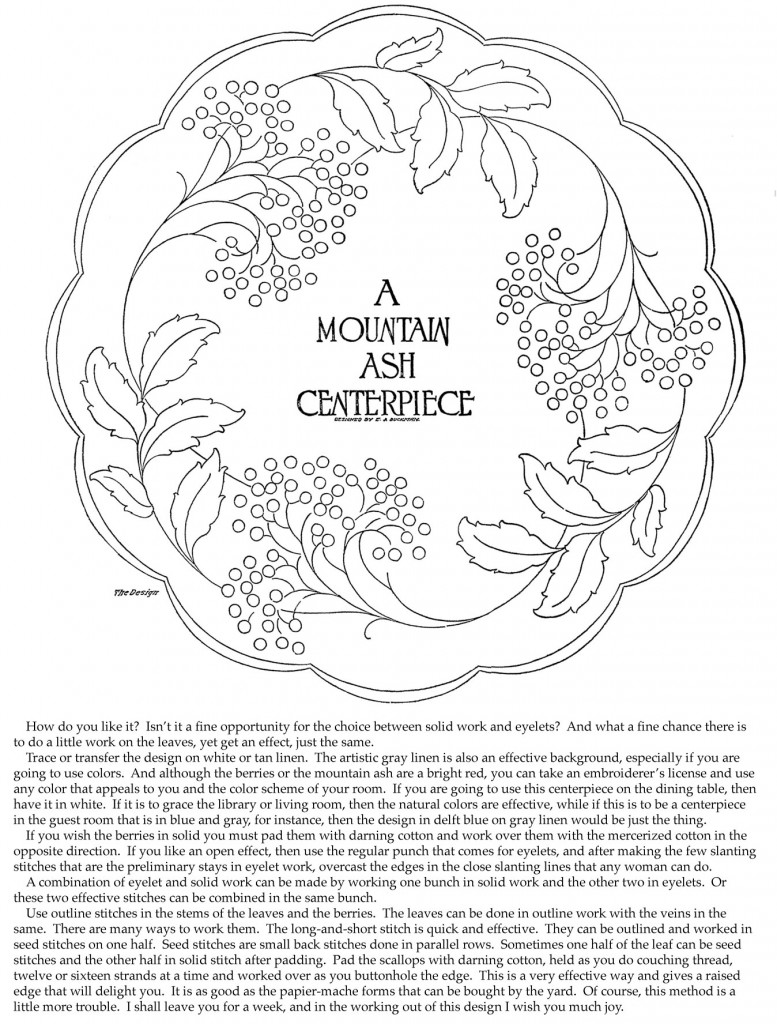 Because I wanted a break from cutting thousands of little kit quilt pieces, yesterday I decided to try some small crazy quilt blocks.  In the past, I have used top stitching on my crazy blocks, because I enjoy making curved and odd shaped pieces.  I do like the look of more weird shapes, but the top stitching doesn’t look nearly as nice as the hidden seam most people use in these foundation pieced blocks.  Too bad I don’t have a cute blanket stitch on either of my old Berninas.

Anyway, this time I tried using the stitch and flip method (not sure if that’s the right term).  It took some getting used to, but I finally think I have the hang of it.  Still, I wish I could do curves. 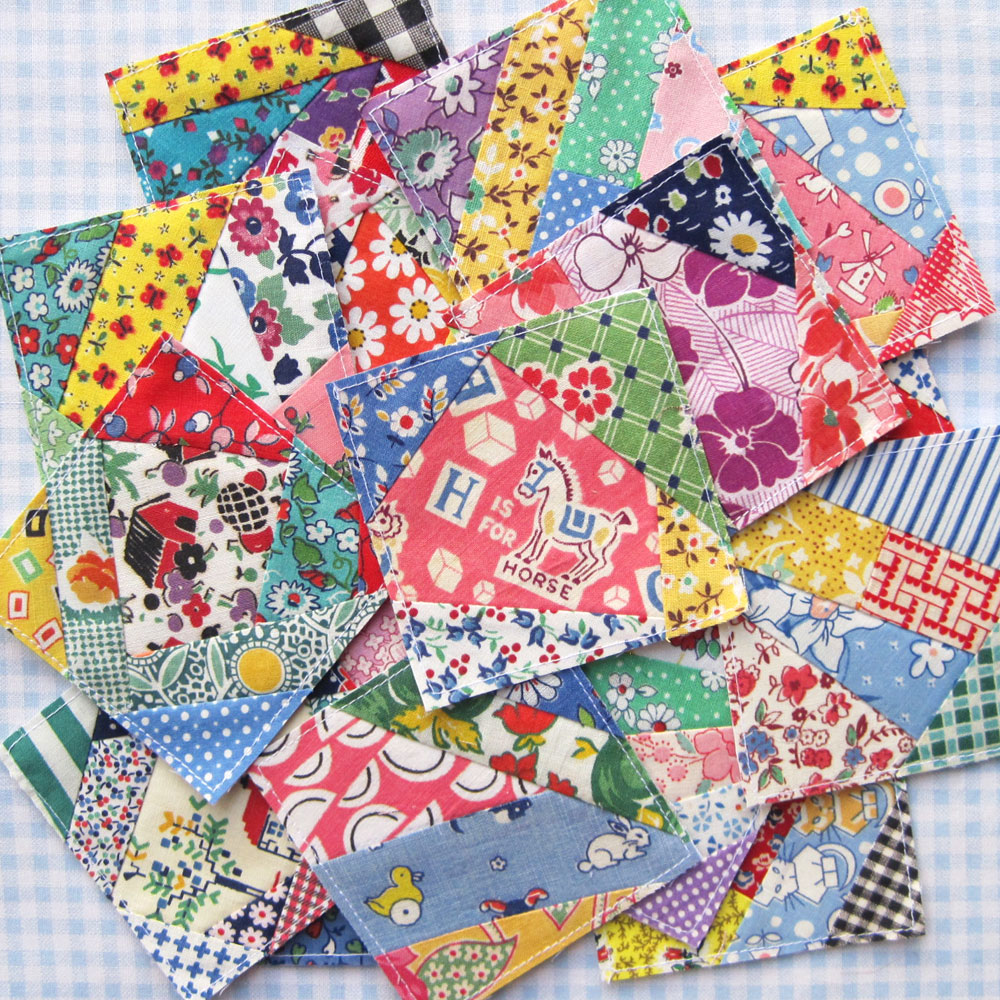 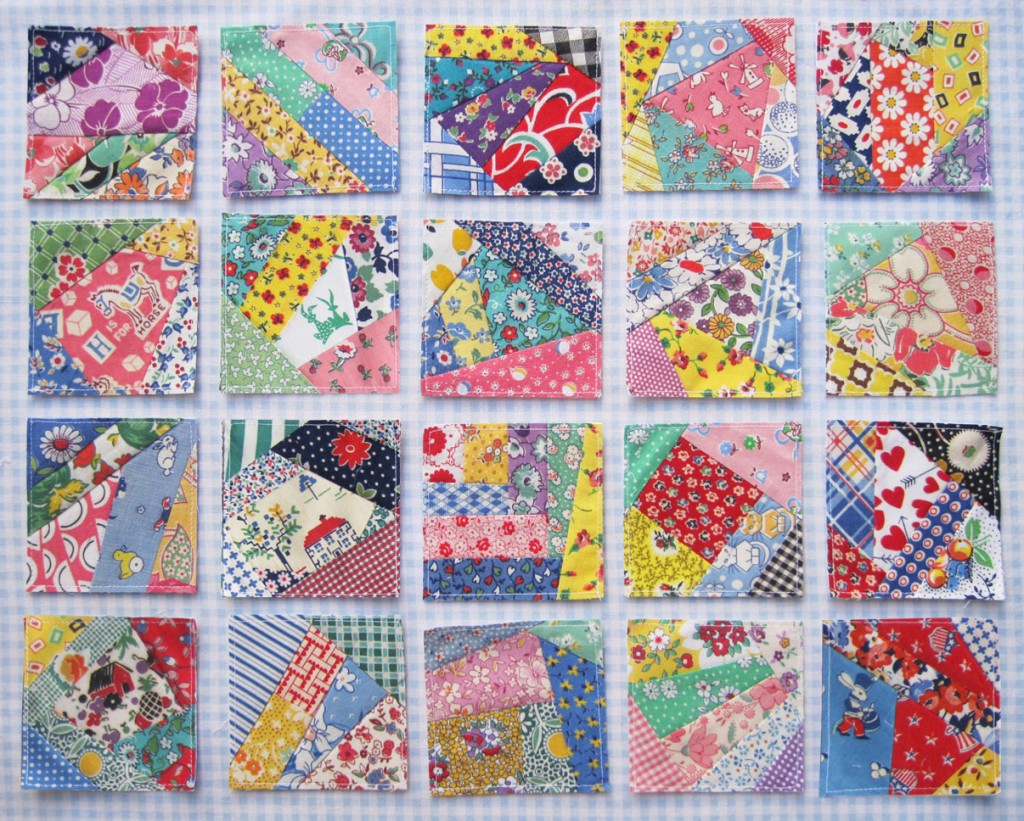